Mankind has been at war since the dawn of time...
and mankind is losing.

Mankind has been at war since the dawn of time... and mankind is losing.

Welcome to New York City: a ruthless metropolis, with forces of corruption so volatile, so pervasive, they've become ingrained into the very fabric of society.

For eons, evil and its engulfing power have gathered to dismantle mankind and bend it to its will. Humanity has been brought to its knees in a long losing war, with no hope in sight.

Until Darius Jones joins the fight.

Follow Darius as he’s thrown into a world he never could have imagined – of heinous Sin and hidden Virtue. He’s forced to question everything he thinks he knows about what it means to be GOOD in a world dominated by so much evil.

To save humanity, Darius must uncover what it takes to purge the world of darkness made flesh by answering this war’s biggest question:

Can we overcome inescapable corruption before it’s too late?

Get A Sneak Peek Inside The World Of Martyrs! 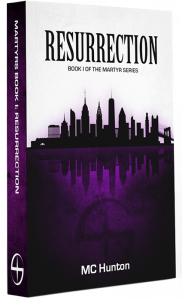 The debut novel in The Martyr Series is launching July 17, 2021! To preorder the book for 15% off, join my mailing list!